Objectives: This study evaluated the effect of instrumentation techniques on the postoperative pain after single-visit root canal treatment.

Materials and Methods: Sixty patients having an indication of endodontic treatment were included. Only single rooted teeth were selected The patients were randomly divided into 2 groups. In group 1; the root canals were instrumented using ProTaper Next instruments with rotational motion, in group 2 TF Adaptive instruments with adaptive motion were used during instrumentation. Treatments were completed in a single appointment. Postoperative pain questionnaires were scored by patients using a four-point pain intensity scale for 12, 24, and 48 hours. Mann Whitney-U, Friedman and Wilcoxon tests were used for analyzing the final data.

Conclusions: Both instrumentation techniques caused postoperative pain. The pain scores indicated that both techniques caused limited discomfort associated with slight pain which did not require any additional treatment and medication.

The Editor’s recommendation of this issue’s article to readers 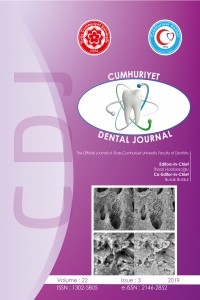