EVALUATION OF ANTEGONIAL ANGLE, ANTEGONIAL DEPTH AND GONIAL ANGLE IN SEX PREDICTION IN THE TURKISH PEDIATRIC POPULATION OF THE EASTERN MEDITERRANEAN REGION

AIM: In this study, it was examined whether antegonial angle (AGA), antegonial depth (AGD), and gonial angle (GA) are associated with sex in a Turkish pediatric sample to be able to determine a reliable method for sex estimation in children. METHODS: The study was retrospectively carried out on panoramic radiographs previously taken for children’s dental treatments for different reasons. An oral and maxillofacial radiologist measured AGA, AGD, and GA on the right and left sides on panoramic radiographs, and their mean values were calculated. RESULTS: The mean age of 197 children was 11.5±1.28 years. The results revealed that AGA and AGD significantly differed between the children by sex. However, it was not the case for GA by sex. CONCLUSION: Overall, it was concluded that AGA and AGD can be used to estimate sex in the Turkish pediatric population from the Eastern Mediterranean region; nevertheless, GA is not reliable. 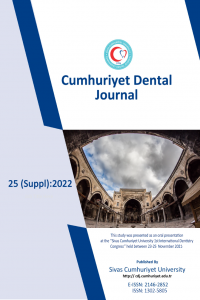